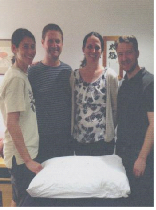 It is often said that it’s only when you finish your degree that you start to learn about acupuncture, and although not entirely true, after three to four years of lectures, tutorials and the safe cocoon of the student clinic, it is somewhat daunting upon graduation to be released into the world as an ‘acupuncturist’.

From differential diagnosis, patient management and marketing, to the hard realisation that none of the patients seem to fit neatly into the patterns described by Maciocia, Betts or Maclean and Lyttleton, there are many minefields to manoeuvre in the first few years of practice. Turning that undergraduate five-year business plan into reality is tough, especially when you’re on your own. That’s why in June 2014 five of us who graduated between two and five years ago came together to form a supervision group.

Laura, Stacey and Tom had met at a BAcC Business Development Day – Setting Up In Practice – the previous autumn. Clare had worked with Stacey as a volunteer at Stepping Stones, a multibed clinic in East London, and also introduced Andy to the group, who she knew from studying at the London College of Traditional Acupuncture (LCTA).

Following one-to-one supervision with Isobel Cosgrove, Laura was encouraged to set up a group of recently qualified acupuncturists who would discuss cases and share tips, concerns and successes.

Tom felt he needed the support and didn’t want to be an isolated practitioner. Aware that supervision is a model that works well in other therapy professions he thought that it would be an important way to keep learning and improving as a practitioner. ‘I always thought that acupuncture should be taught as an “apprentice– model and thought the group could help fill that vacuum for me.’

For Clare the idea of a group was attractive because she had learnt about supervision at university and was given the impression that it would be a worthwhile investment.

Andy thought it would be a good way to get help with ideas for his practice, to receive support with challenges – emotionally, practically or clinically.

We meet at our supervisor’s house every four to six weeks, with dates scheduled for the year ahead. The cost of attending the group is negotiable for those just starting out (£45/£.60 per two/two and a half-hour session). The group opens with each person giving ‘headlines’ of what’s been happening in their practice since the last meeting. Then time is allotted to anyone who wants to bring a case or an issue. The supervisor leads by example and sets the tone for the group dynamic: nurturing and trusting that we know the right answer and that she is able to bring it out in us or through someone else in the group.

Examples of what we bring to the meetings include:

As well as group emails that circulate on an almost weekly basis – details of an interesting CPD course, an SOS with a particular patient diagnosis, etc – the group has also started meeting in Tom’s beautiful ‘cabin’/treatment room in his back garden, which is good for all sorts of reasons, such as:

‘Until I started in the group I didn’t really understand how powerful it would be. The main aspect for me is sharing, ideas, cases, concerns. The supervisor is able to facilitate and allow us all to talk freely and in a very trusting environment.’

‘It feels comfortable to share cases and experiences where we don’t feel confident, without feeling judged or looked down upon. No matter how silly the question, it is met with respect and understanding.’

The non-competitive, amicable, trusting and supportive environment is a breath of fresh air when starting out. We all work in north London with the potential to see each other as competition, yet we value each other as colleagues working together. Everyone is generous with their knowledge and there is great team spirit.

It’s a good size of group to make it intellectually and professionally stimulating. We can easily share ideas, articles, research, techniques, resources, etc, as well as giving each other general emotional support and pastoral care.

Greater than the sum of its parts

Together we have almost 40 years of experience to tap into, which adds credibility and assurance for our patients or employers: ‘My supervisor has been practising for 30 years’, or, ‘Your case is quite unique, I’ll take it to my supervision group’. Our combined clinical experience is vast, and business knowledge/ ideas have also been offered freely.

Converting acupuncture theory into practice is not always a smooth path and the opportunity to freely raise any doubts in turn helps build individual confidence. The group gives a chance to share (and laugh) with others going through similar things, and to gain the strength that comes from knowing that you’re not on your own.

As Mentors Supervisors what do we do? extract from Acu. BAcC Newsletter Pub.| Summer 2014

extract from Acu. Newsletter Published by the BAcC | Summer 2014

The day intelligently helped members re-energise and reconnect with the excitement of acupuncture practice. It also offered a space to review difficult practice issues. And it helped me to understand what members really thought of the BAcC, its plans and approaches.

As a challenge back to those who attended, I suggested that there were perhaps myths among the membership regarding supervision that needed to be dispelled. I asked those present to explain more about what their particular network offers and how effective supervision is for them. Here is a brief selection of the many responses I received.           Isobel Cosgrove.

As mentors and supervisors, what do we actually do?

‘We offer a confidential, professional setting where acupuncturists can examine a full range of work issues: patient management, running a clinic, case studies, life transitions. A supervision or mentoring session is often the only unbiased place a practitioner can do this.’

‘At every stage in a practitioner’s life, supervision provides a safe environment in which to gain an understanding of ourselves at work. It provides an opportunity to create a stimulating, satisfying and fulfilling working life.’

‘In supervision there is a chance to quieten the critical voice, to appreciate how hard we work, to share our concerns in a non-judgmental space.’

‘I run a multidisciplinary clinic and offer mentoring to practitioners working

in it. Frequent issues are patient contracts, boundaries, multiple roles, conflict of interests and promoting our practices.’

‘We draw on our own wisdom and that of others. We keep a weather eye out to ensure all patients are cared for, that we work ethically and to best practice guidelines.’

‘We call on our experience in practice, and our training in mentoring and supervisory skills, to enable clients to bring a broader perspective to clinical cases and practice issues. In providing group meetings we reduce isolation.’

‘We help group members to identify areas where they need input, and indicate where they can find it. We empower them to develop as professionals. A group is where deeper reflection, insights and development can take place.’

‘These days, in law firms, mentoring is offered to nurture the careers of employees. This is now referred to as “talent management’. Obviously there are differences between lawyers and acupuncturists. I like to embrace the positivity in mentoring: we are good and we want to get better.’

How can we assess the effectiveness of the work we do?

‘I keep a record of each session and actions which may arise after. I then review, either on my own or with my colleague with whom I run a clinic. We use a template she created for this purpose.’

‘Reading emails sent by members after a meeting shows me the results of their work in the group. As a member I am less isolated, less distant from the profession (and the BAcC). I am more connected, focused, disciplined, and a better acupuncturist.’

‘I see the effectiveness of my own supervision in changes in the way I handle my work. This is in no small part to do with the feedback and support I have received in my group. I also see the practitioners I mentor developing more skills. This is reflected in the questions they ask, and the complexity of the problems they bring.’

‘It is clear when a practitioner feels nourished by their work in a group. During a session work done is often still “in process”. At the next meeting we hear of changes and progress made and review the original work.’

`CPD for supervisors/mentors is essential. Those of us who run groups get regular input from senior colleagues, in order to maintain high standards of facilitation. Also my supervisees give me regular feedback.’

‘Supervision is increasingly seen as important in maintaining the well-being of staff and providing quality care to patients. For most professionals in the health and social care sector there will be a requirement from their professional body that they undertake supervision (not just during training but as an ongoing requirement for professional development and continued registration), and the majority would agree that this is a necessary activity.’

‘The evidence that is currently available shows an advantage to both practitioners and patients when the practitioner engages in effective supervision.’ Stanton & Dunkley (2012)

Below is a short list of the benefits of supervision

Nurses have found that supervision helped them to acquire a new perspective on a problem when a patient’s situation was not moving forward. The supervision provided emotional support and increased energy to work on the situation. (Buus et al. 2011)

In a systematic review on the studies of supervision of psychotherapists the authors found that supervision produced a range of benefits in self-confidence, awareness and skill for the supervisee’s. (Wheeler and Richards 2007).

Supervision has been shown to reduce the rates of burnout in community mental health nurses. (Edwards et al. 2006)

In psychiatric nurses supervision was perceived to be effective as it was associated with increased job satisfaction, vitality and rational coping. (Gonge and Buus 2011)

What makes for effective supervision?

What is important in the training of Supervisors?

A review of the literature (Sloan 2005) summarized the characteristics that supervisors see as important to supervision. They are:

 Being able to make specific suggestions about interventions;

 To be able to give feedback on performance;

 To provide a non-judgemental environment;

 Being committed to supervision.

Participants in an intensive CBT training programme, where detailed feedback was given, found that , those participants that had supervision after the training maintained their new skills where as those without supervision returned to their pre-course levels within nine months. (Beck 1986).

In a literature review one of the summaries was that the single most important factor for effective supervision is probably the relationship with the supervisor. (Kilminster and Jolly 2000).

In carrying out a survey of healthcare professionals who had received at least six months experience of supervision, (there was a response rate of 62% from 799), found thatsupervisors who had had supervision training were rated significantly more highly on a range of evaluation measures than colleagues who had not been trained in supervision. (Hyrkas et al. 2006).

Wheeler, S. and Richards, K. (2007) The impact of clinical supervision on counsellors and therapists, their practice and their clients: a systematic review of the literature, Counselling and Psychotherapy Research, 7(1): 54–65.